Wow. We got a lot of snow last week. The news said over forty inches total in January. And there’s more coming Thursday, maybe! Wahoo!! I know people are sick of it but it’s winter. It’s supposed to snow.

Last week it was still swing-able (in theory). Not anymore!

Now THAT’S a lot of icicles. And yes, that is their 6-foot-high fence in the foreground. 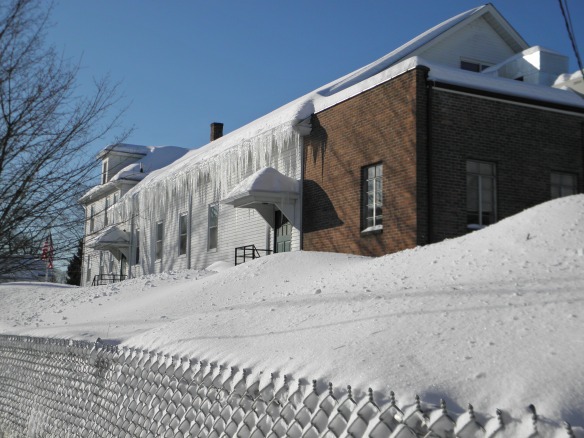 It’s kind of unnerving to be driving along, look out the window, and have the snow be higher than you are. (I’ve driven through snow tunnels in Colorado that put this to shame but still – this is Massachusetts.)

Anyone for hoops? I think the ball’s frozen.

These are my rainbow icicles. I was trying to get the colors – they were sparkly – but the camera didn’t pick them up. Still, pretty.

Welcome to the home of snow! (Yep that’s my poor Christmas tree still jammed in the snow bank. Bet the plow guys love that.)